How finding your passion changes everything

The problem of youth unemployment is an old one. Sir Ken Robinson has been working on it since the 1970s because, besides being an intractable problem, it is getting worse.

It has economic, cultural, social, and, of course, educational causes, and although we cannot say that education is the sole cause, we can say that it is the one most contributing to it, exacerbating the unemployment of young people. At the same time, it is one of the main solutions:

We cannot solve the problem of unemployment if we do not take action regarding education systems which are destroying the talents of many young people.

For Ken Robinson one of the causes of youth unemployment is demographics, the exponential population growth seen in recent decades, which he calls “the other climate crisis”. Another important factor is technology, which just in the last 10 years has created an upheaval comparable to that of the Industrial Revolution. This is very important because the foundations of our education systems are based on our ability to predict what will happen, but technology and demographics are both engines of change which are difficult to predict and control. However, there is a third factor which we can influence, and that is policy.

Current education systems are designed to obtain outcomes which diverge from what should be obtained and they make the problem endemic. They are based on three principles. One of them is conformity within our education systems; that is, they are predictable, they are designed on the basis of conformity, when in fact they should be designed to disrupt. No two children are the same, however our educational systems are based on conformity, on theory, side-lining anything practical. This means that many young people get bored, become disinterested and eventually leave. This makes it seem as if it is all attributable to a failing of children and young people, but in reality it is a failing of the system. It is as if a company lost 25% cent of its customers, and we said that it was a failing of the customers, and not of the company.

The second principle is the linearity of education systems, which narrows the curriculum. The third principle is compliance, because it has created a competition between countries to achieve the first places in the Pisa rankings. We have created a kind of educational Eurovision.

The problems start when we lose sight of the fact that education is about people and not products. When we forget feelings, emotions, beliefs or people, reducing everything to an outcome to get a place in the Pisa or any other ranking report, we are failing. Training is not an impersonal process, but a deeply human one. For Ken Robinson there are two worlds: the one outside which already existed and exists before us and another one, the inner world, the world to be found within us, the world of consciousness, unique to every child and young person. Education works when it is understood that we must address both worlds.

Subscribe to the Euro Forum Eyes newsletter and you’ll find out about all the most important current affairs, events, news, and subjects of interest in the field of young people and employment, education and social exclusion.

Any cookies that may not be particularly necessary for the website to function and is used specifically to collect user personal data via analytics, ads, other embedded contents are termed as non-necessary cookies. It is mandatory to procure user consent prior to running these cookies on your website. 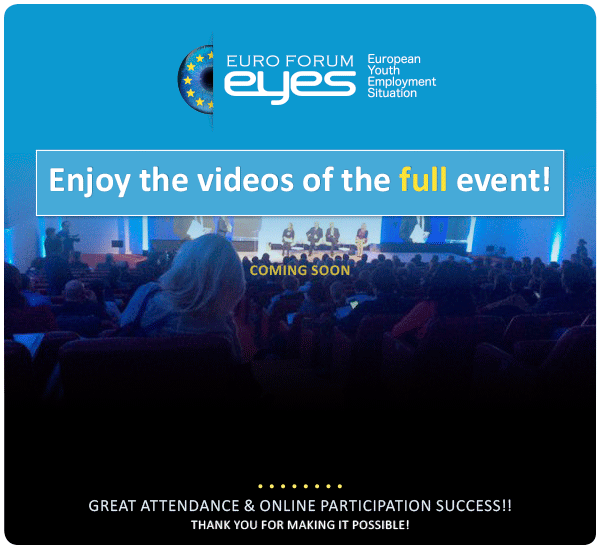